Armed Forces of Ukraine: taking a line to NATO. The interview with the Commander-in-Chief of the Ukraine Armed Forces, General of the Army Viktor Muzhenko 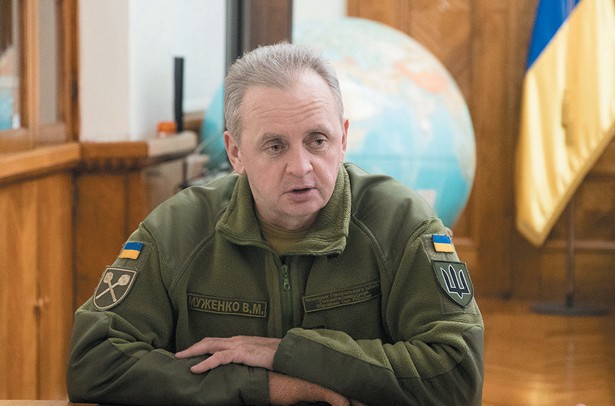 Tell us what this transition means on the whole and what are the high-priority tasks in 2018. Do they comply with NATO representatives’ priorities?

The transition to NATO standards means the changeover to a qualitatively new level of the Ukraine Armed Forces, the final escape from the so-called post-Soviet heritage. This is a new philosophy of military construction, which efficiency has been proved by the experience of the world’s major powers.

This is a very deep and substantial internal restructuring of the military organism on the whole. Foremost, it concerns reformation and improvement of the Armed Forces management system efficiency, regulation of the activities of the agencies involved in this process, achievement of the ideal balance between planning and the usage of resources and capabilities in the operational, administrative and material spheres.

It is important to realize that the “NATO standards” are not referred as an abstract category. These are carefully developed and officialy documented regulations and norms that are applied to a certain sphere of military activity.

A squadron and seven battalions of the Ground troops and Assault forces of the Ukraine Armed Forces, 26 squadrons of special operating forces and 236 military servicemen of the Military Police of the Ukraine Armed Forces just have finished military training exercises according to the NATO member-countries’ standards  in the Interdepartmental Center of International Security.

The Armed Forces of Ukraine use 765 such standards, or in other words, NATO normative documents for training. Most of these documents (655) are used in the source language, which is English. 13 of these documents have been already translated into Ukrainian, while 97 documents are still being processed by translators.

However, all of these documents are carefully studied and used to create NATO-compatible national standards and the training procedures of the Armed Forces of Ukraine and other units of the defense forces.

NATO statutory documents (standards) in the source language are used mainly by military units of the Ground Forces, Air Forces, Assault Forces, detachments and ships of the Naval Forces of the Armed Forces of Ukraine, which take part in international cooperation activities and in joint with NATO activities and structures, including NATO Response Force.

The Armed Forces of Ukraine use 765 NATO standards (statutory documents) for training:

Statutory documents of NATO (standards) in the source language are used mainly by military units of the Ground Forces, Air Forces, High-Mobility Assault Forces of the Armed Forces of Ukraine, detachments and ships of Naval Forces, which take part in international cooperation activities, and units designated for participating in the Forces Planning and Review Process, NATO Operational Capabilities Concept and NATO Response Force.

As part of the Joint Multinational Training Group – Ukraine (JMTG-U) in the Interdepartmental Center of International Security (hereinafter ICIS) one squadron and seven battalions of the Ground troops and High-Mobility Assault forces of the Ukraine Armed Forces, 26 squadrons of special operating forces and 236 military servicemen of the Military Police of the Ukraine Armed Forces at the moment have finished military training exercises according to the NATO member-countries’ standards.

It is scheduled to finish activities on the development of the compatible national standards and training procedures of the Armed Forces of Ukraine and other elements of the defense forces, their implementation in the training of troops (forces) by the end of 2020.

Today, Ukraine is the only partner country taking part actually in all NATO operations and allocating its own units to participate in the NATO Response Force.

At the moment 14 units from the Ground Forces, Air Forces, Naval Forces, Assault Forces, Special Operations Forces, Military Police, and and medical teams from the Central Military Medical Department have been designated to participate in the Forces Planning and Review Process, NATO Operational Capabilities Concept and NATO Response Force.

It is very important that in Interdepartmental Center for International Security one squadron and seven battalions of the Ground troops and Assault forces of the Ukraine Armed Forces, 26 squadrons of special operating forces and 236 military servicemen of the Military Police of the Ukraine Armed Forces for now have finished military training exercises according to the NATO member-countries’ standards. 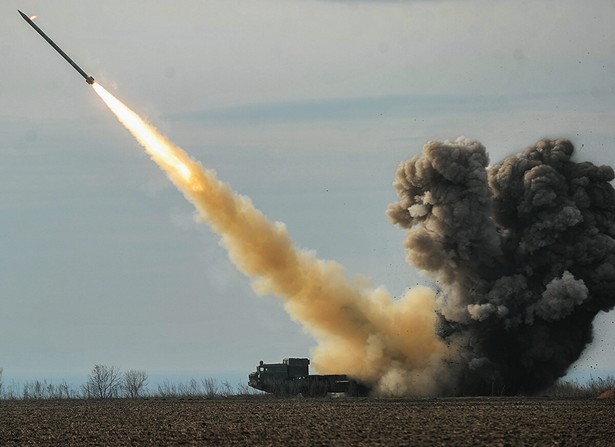 It is clear that the military experts from the Alliance are involved in the processes of assessing these units, their capabilities and their willingness to act with NATO units. However, assistance from NATO and individual member- states is not limited by this. We have a group of strategic advisers, training missions involving the best experts from partner countries that provide us with comprehensive and substantial assistance – from strategic planning and logistics to improving the personal skills of an individual military serviceman.

What is the “journey plan” for this process and for what period is it designated?

It should be noted that after the difficult lessons which the country has got in 2014, the situation in the Armed Forces of Ukraine has changed radically. This has been achieved due to the strength and self-sacrificingness of the Ukrainian people, the courage and conscious choice of Ukrainian military servicemen, who by consolidated efforts have stopped the insidious Russian aggressor and are taking up fight for restoration the sovereignty and territorial integrity of our state.

The Armed Forces feel the great potential of public trust and constant attention from the state leadership. Now the most important directions of military restructuring, which correspond to all doctrinal documents, are clearly set out in the State Program on the Development of the Armed Forces of Ukraine for the period up to 2020.

This document defines five strategic development goals based on the principles and standards established by NATO. 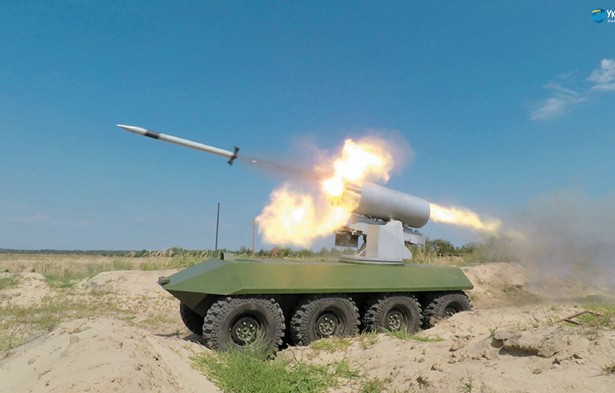 The state program gives us what you’ve called the “journey plan”, and outlines specific timelimits for its implementation. The main objective of these efforts is acquirement by the Armed Forces of Ukraine the capabilities for the most effective response to the threats to national security in the military sphere, the defense of Ukraine, the protect of its sovereignty and territorial integrity, as well as the achievement of the Euro-Atlantic standards and criteria, which are necessary to get membership in NATO.

For reference: during the implementation of the State Program on the Development of the Armed Forces of Ukraine for the period until 2020, it is planned to implement a number of practical measures, in particular in:

The transition to NATO standards is one of the main tasks of the Armed Forces development, which is reflected in the conceptual documents.

This refers, first of all, to the Strategic Defense Bulletin of Ukraine and the State Program on the Development of the Armed Forces of Ukraine for the period up to 2020. 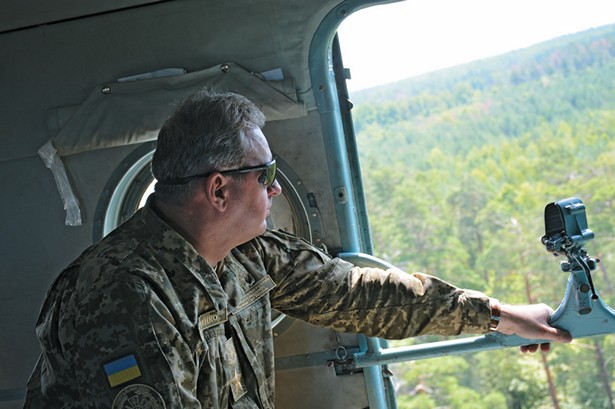 Our military men should acquire capabilities that will enable them not only to respond effectively to military threats to national security of Ukraine, but also to achieve the Euro-Atlantic standards and criteria, which are necessary for Ukraine to become a NATO-member.

“NATO does not impose anything on us. They just point out the direction and the goal, and we choose the ways to achieve our goal by ourselves”.

The Strategic Defense Bulletin defines five strategic goals for the development of Ukraine defense capabilities, which include: the development of the defense forces management system, the implementation of the planning and resource management system, the achievement of operational potential of the troops, which will be sufficient to repel aggression and defend the state in accordance with NATO principles and standards. Two other important goals are the implementation of the integrated logistics system and the medical support system, which are of particular importance under conditions of combat operations. All of these capabilities should be based on the present principles and approaches of the NATO member states.

Achieving these goals till 2020 is actually a rather challenging task, but we do not mark time. At the moment, half of the structural units of the General Headquarters have been transformed into the “J-structure” established in the NATO headquarters, that allows increase the efficiency of the military administration and avoid functions’ duplication. We plan to finish this work in the General Headqurters and bring the military authorities of operational and tactic levels in line with NATO standards up to 2020. 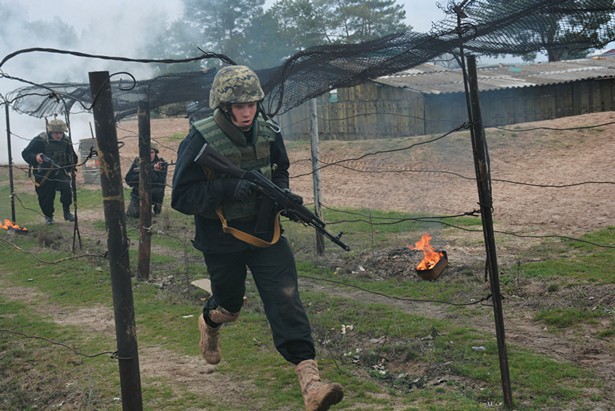 We keep working on the delineation of responsibilities and tasks between the military authorities on planning, training and using of troops (forces). The General Directorate of Logistics (J4), the Main Military Medical Directorate and the Public Affairs Department have been formed.

The implementation of a defense planning technique based on capabilities has also been launched.

It can give a possibility to plan defense forces more qualitatively and harmonize defense and budget planning. 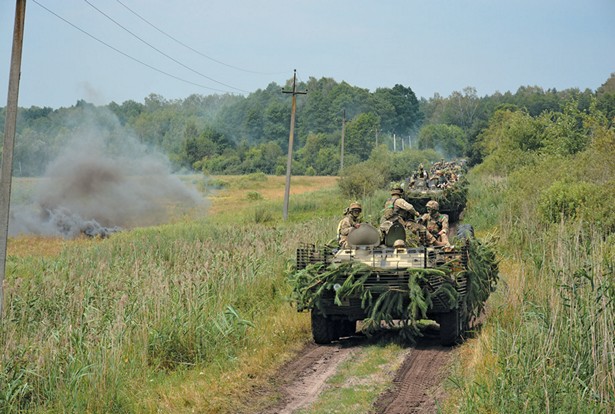 The main objective of military cooperation of Ukraine (in particular with NATO countries) under currrent conditions is to increase operational capabilities of the Armed Forces of Ukraine, to achieve compatibility with NATO, to exchange experience and to adaptat to new challenges and threats in the sphere of defense and security. This can be achieved through the implementation of the common priorities of military cooperation between NATO and the Armed Forces of Ukraine, which are clearly defined in the Working Plan of the Ukraine – NATO Military Committee:

How do you evaluate the readiness of the Armed Forces of Ukraine and other law enforcement agencies for the NATO standards? How much is the military personnel willing to accept mentally not only the need for technical re-equipment, but also the new standards of interaction?

Any willingness is not sufficient for ever, because there is always field for improvement. But answering directly on such a question, I can say: yes, the Armed Forces are ready for transition to NATO standards. It’s a different matter that this is a gradual, evolutionary process that requires a responsible attitude first of all to people. All these changes and all NATO standards in fact are aimed at the development of people’s professional abilities and maximum possible self-realization. This system allows find and promote officers and sergeants having the qualities of real leaders, who can show the talent of brilliant commanders under armed conflict conditions. These are people who are our main treasure and our main asset, and our Western partners uninterruptedly remind us at all levels about this.

It is the fact that the Armed Forces of Ukraine have changed significantly during the last few years after the events of 2014. For example, the large proportion of the officers occupying leading positions has a real battle experience. I have already provided this example: in the period from 2014 to 2017 officers occupying the positions of battalion commanders have changed twice on average, and there is the same statistics at the level of brigade commanders. This means that these officers get further education and occupy higher positions. These are the officers having battle experience, who now are the key personnel of the Armed Forces of Ukraine. They are the future of the Ukrainian Army.

You ask if they are ready for changes. They are ready. Ready to take responsibility, master the latest troops and armaments comntrol systems. Ready finally to tranfer to NATO standards, with which almost everyone of them is already acknowledged. 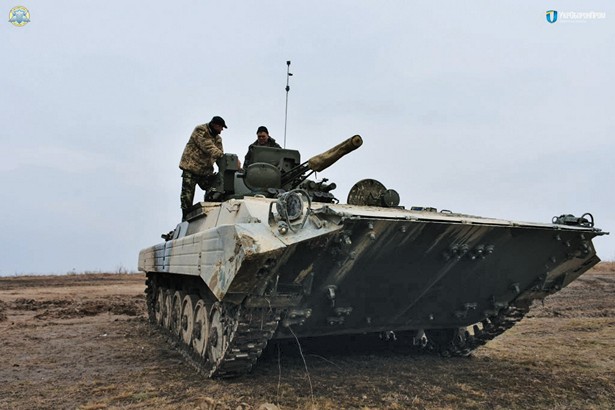 So, I do not see a big problem in the internal transformations of the Armed Forces. And NATO does not impose anything on us.

They point us the direction and the goal, and we just choose the ways to achieve our goal by ourselves. 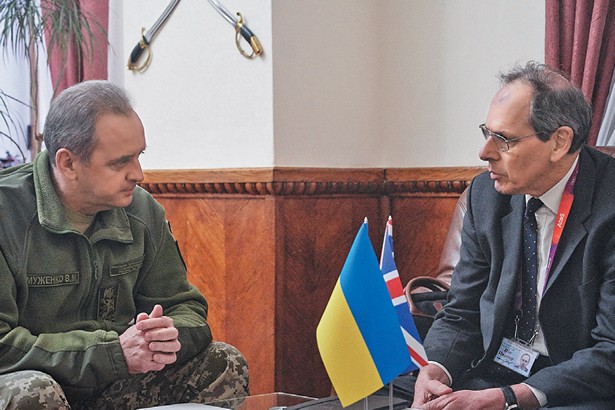 By the way, talking about NATO standards, we must clearly understand that they are a universal instrument that does not suppress the development of the national Armed Forces in the Alliance member countries. Ukraine is not an exception. Our Armed Forces will also have national Ukrainian features, but we will talk with our NATO partners in one language, the language of universal North Atlantic standards.

The interview was published in Telecom magazine Special edition 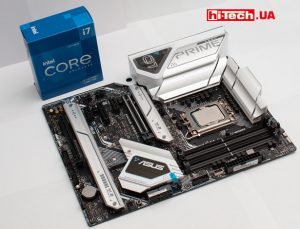